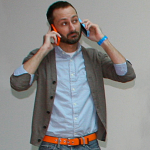 Raised in captivity, Cory finally gained freedom from a small zoo in suburban Northeast Ohio in a daring mid-afternoon escape.

The Smurfs by Peyo

The adventures of the misunderstood wizard Gargamel and his many altercations with the linguistically-challenged Smurfs. A simple man just trying to care for his innocent cat Azrael, Gargamel is constantly maligned by the doddering Papa Smurf and his nefarious cohorts – condescending mastermind Brainy, explosives expert Jokey, and everyone's favorite blue trollop Smurfette.

Harry Potter and the Half-Blood Prince by J.K. Rowling

Harry returns to Hogwarts School of Witchcraft and Wizardry for his sixth year. As the war against Voldemort escalates outside the walls of Hogwarts, Harry and his classmates continue their studies – learning to Apparate; perform non-verbal incantations; and, in Harry's case, finally excel at Potions with the help of the mysterious Half-Blood Prince. Harry sets out to learn how Tom Riddle became Lord Voldemort while casualties mount, relationships falter, and others begin.

Watership Down by Richard Adams

When the gifted young rabbit Fiver foresees a grave danger approaching the warren where he and his brother Hazel live, the two decide to set off in search of a new home. Along with a small band of friends, the brothers embark on an epic adventure to find a place for themselves in the world.

Harry Potter and the Goblet of Fire by J.K. Rowling

Harry's fourth year at Hogwart's School of Witchcraft and Wizardry finds him attending the Quidditch World Cup, competing in the Triwizard Tournament, and facing evil once again.

The Dark Tower: The Gunslinger by Stephen King

The man in black fled across the desert, and the gunslinger followed. The Dark Tower series tells us the story of Roland, the last gunslinger in a world that has moved on. He is on a quest for the Dark Tower, and along the way meets the members of his ka-tet, a group bound together by destiny to achieve a common goal. Hard won battles and difficult decisions face this band of unlikely companions as they travel onward, and as the tower gets closer…

What if the Coen Brothers directed The Curious Case of Benjamin Button?

What if Christopher Nolan directed The Hangover?

What if Wes Anderson directed The Hangover?

What if The Hangover was directed by Paul Thomas Anderson?

(If Days Of Thunder was made 30 years later.) Cole Trickle enters the high-pressure world …